A pitbull fighting breeder from a California shelter, a yellow lab who refused to chase bears, an arthritis-chewed chocolate, a blind barking English Cocker, a loon-hating-and-hunting- goldie, a border collie-cross rescued from an Edmonton ice shack – these have been our cottage dogs.

Not that we’ve owned them all. Some came from neighbours whose dogs quickly figured out ours was the cottage with the most kids and therefore possibly the most cookie-crumb-lined floor.

Every dog had an asset – the lazy yellow tracked children wandering in the forest. The border collie treed bears. The goldie cleared out grouse, squirrels, beavers, snakes, mice and bats, giving me a startle-free hike wherever I went. The chocolate lab kept children amused for hours on the dock with her non-stop game of fetch. The pitbull kept ne’er-do-wells at bay with just a glance.

And now this latest addition, a black lab lassie, the guidedog-school drop-out, the nervous Nellie of her class: What would be her secret super-power? On arrival at the lake, she embarked on the classic dog orientation session, which is to say she careened madly about the forest, waiting for someone to call or tie her, and then discovering that no one would bother, returned home to the cottage and did – nothing, except stare in hope one of us would feed her.

Over the next few days, she established her expertise as a DEW-line, ie. distant early warning device, which would be a good thing except that she is warning us about the train that passes 2 miles north of us, the  weird bird that twitters at 4 a.m., a truck rumbling on the highway a mile away, the cottage neighbour as he heads out for his early-morning fishing expedition at 5 a.m. This unpleasant list goes on. We like the motion-sound-sensor aspect, but there’s no dial to reduce her volume or sensitivity settings.

And then yesterday, as Dave made his way up the hill after a swim, a grouse leapt up, head-height, talons raking the air. Here was the dog’s chance at redemption! Ambushing birds fall into the Dog Department, and so Rover (not her real name) was dispatched to explain to the grouse that such things are just not done.

There were high hopes at the outset – she is, after all, a birding/hunting breed. She pranced about head and tail high, hackles suitably raised and then dove into the bush whereupon she sniffed out the grouse’s tangled trail, without getting within 10 feet of the grouse who remained just off the boardwalk, probably laughing her tail feathers off at our lame ‘military’ response.

So, she won’t swim; she won’t boat, she won’t engage in critter-management, but we are not dismayed. We will make a cottage dog of her yet, just as soon as we figure how.

And that’s the news from the lake, where the loons are calling, the dog is barking and the swimming is still a little too chilly. 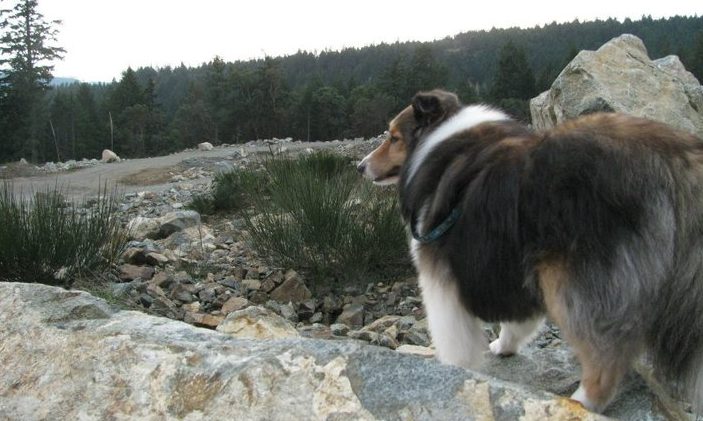